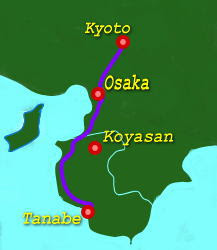 The Kii-ji route begins in Kyoto. In ancient times, court nobles and their entourages boarded boats and floated down the Yodo River (Yodogawa) to Osaka. From Osaka, people traveled by a variety of methods. Some went by ship along the coastline to Tanabe, and other walked. Some rode horses. Nobility were often carried by porters in covered litters somewhat like miniature stagecoaches built for one person. But, once pilgrims reached Takijiri-oji on the Nakahechi route, all pilgrims had to walk through the sacred mountains to the three grand shrines to worship before the gods. Along the way there are shrines called oji (王子）which literally means a "child prince." They vary in size and importance. There were 99 oji from Osaka to Kumano Nachi Taisha, but some have fallen to ruin and little more than markers remain in some cases. Among the oji, five were important places for holding religious and cultural ceremonies and activities. They are called Gotai-oji. 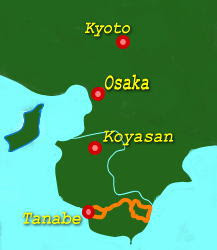 The starting point of the Nakahechi route is in the city of Tanabe. The city has flourished in commerce and culture since ancient times. Many pilgrims came from Osaka by ship and began their pilgrimage from Tanabe. Two routes developed at different times in history, hence the first section of the orange lines shows two paths of the routes. In the Heian era (9th to 12th century), the path wound through Tanabe towards the Tonda River (Tondagawa) passing by several ojis. In the reign of the Tokugawa shoguns, pilgrims bypassed the lower area of the Tonda River by crossing over Shiomi Pass (Shiomi-tōge). The orange lines on the right are not two separate routes. They are a loop starting in Hongū, progressing to Shingū and on to Nachi then returning to Hongū. 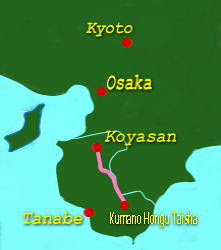 The Kohechi route is the path between Koyasan and the Kumano Sanzan area. There are few roads into this remote area, so it is less frequently traveled than other paths. Of particular note is the route over Mt. Hatenashi (Hate-nashi-san). Thirty-three small shrines mark the path from Hongū to Totsukawa. The mountain is 1,114 meters high with steep ascents and descents. These days, hikers should be in good condition before tackling it. Unlike most of the other routes, there are few places to get water or lodging, so most people opt for camping along the way and carrying a large supply of water. 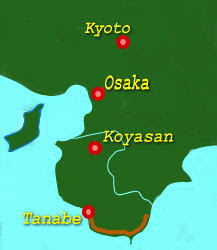 The Ōhechi route was often chosen by people involved in the arts such as poets. The route was longer than the Nakahechi route and therefore was more costly. There are many headlands, and the most southern area of the main island of Japan, Honshu, is located here. The views of the ocean along the way were, and still are, quite spectacular. This has been the fodder of countless poems. Only three sections of it have been declared world heritage sites; Tonda-zaka, Hotoke-zaka, and Nagai-zaka. Nagai-zaka lives up to its name as a long, long upward slope. It is wise to avoid it during hot summer months. The Ise route starts at Ise Grand Shrine (Isejingū) and runs along the coast of Mie Prefecture and diverges at Kumano City to go to Hongū Taisha (Grand Shrine) into the mountains or to Shingū's Hayatama Taisha by continuing along the coast. Travelers from the northern part of Japan often came on this route after making a pilgrimage to the grand shrines of Ise.
Email ThisBlogThis!Share to TwitterShare to FacebookShare to Pinterest
Newer Post Older Post Home 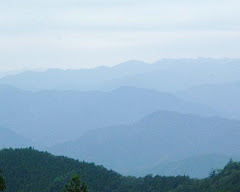